Picking up from last week, Dakkas has left the Humans to find Kashrya.

He dismounted when he reached the site of the skirmish and frowned as he studied the bodies.  He had grown up around Orcs — the Drow had used them as slave labor for almost as long as they had been in exile—and he had never known them to form any kind of organized groups outside of some sort of loose family structure.  But these Orcs…  They were different somehow and he knelt to examine one more closely.

Orcs were roughly the same height as Drow, but had a heavier build.  These had the characteristic grey-green skin and the large dark eyes set into a flat round face, but they were much larger than any he had ever seen, both in height and build.  All were wearing a uniform bearing an insignia that he had never seen, and he was puzzled.  An army of Orcs would be formidable, but forming an army just wasn’t in their nature – as a rule they were timid and shy, even fearful.

The ground was so trampled that it was nearly impossible to read the signs of the battle, but at last he found the place where they had first come across the river. He could see the smaller footprints of the women, could see one set that did not run, that stood facing the oncoming Orcs.

He stood in her footprints and closed his eyes.  She had been in a balanced fighting position, and he could see her clearly in his mind’s eye, the small hand axe that she carried held in a ready position.  He opened his eyes and examined the ground. There was some blood, about at the reach of her arms, but none where she had stood, and he felt a wave of relief.  At least she was most likely still alive.  But why?   Why would the Orcs have captured her?  That, along with the uniforms, made no sense. 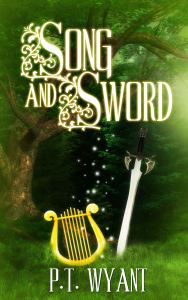