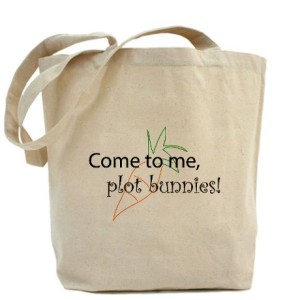 So I finally got brave and dove into my Plot Bunny bag.  It’s a canvas tote bag that I’ve been using as a catch-all for scraps of paper with writing-related stuff on them. (I got it from Cafe Press, if anyone is interested. Not affiliated, yadda yadda…)

Going through it was an all afternoon and half the evening project, but I finally made my way through all of the pieces of paper in it.

I found some incomprehensible notes, partly due to my atrocious handwriting, and partly because I had no clue what I was trying to tell myself. Of course, that’s not the first time I’ve done that, and I’m sure it won’t be the last.

I found lists of names. As a fantasy writer, a good set of names is a good thing to have. Even better would be a good non-clunky way to organize them.  Any suggestions?

I found opening paragraphs, tentative outlines, starts of stories, and, perhaps most mysteriously, middles of stories. (Seriously — I found at least four different sets of pages that were the middles of stories. Two of them I think I have files for, somewhere. A third I really hope I have the start of.  And one — one I have no clue about.  (I think I vaguely remember starting it, once upon a time.)

Oh, and lists. Lots and lots of lists. Lists of names, of settings, of random events.. I think I’m going to put them on 3×5 index cards and draw a random of one of each for a writing prompt: woman on a horse at dusk in spring at a cemetery, anyone?

I found some things that I have added to the Plot Bunny Orphanage, in case anyone wants to adopt them and give them a new home.  I’m sure there will be more later, when I go back through it again.

I found a lot of stuff I’d forgotten that I’d started.  (That’s kind of sad, isn’t it?)

I think my favorite things that I found were the outlines of the novels from my month of insanity.  They bear… no resemblance… to what I ended up writing.

Sword Dancer… it took a sharp turn somewhere and I have no idea what to do with the rest of the outline. Maybe a sequel? I think I could see it as a sequel. (Why am I planning a sequel?)

The Sword and the Shield… Don’t ask. I should pretty much just trash the rest of the outline as it was based on a premise that flew out the window somewhere in the middle of the story. Pack rat that I am, though, I’ll keep it, change names, and use the plot for something else.

Anyhow, that was Round One.

Round Two should involve the stash of papers crammed beneath my monitor, but I’m slightly more afraid of it than I was the bag. (Besides, I think most of them relate to The Academy of the Accord.)

The next round involves going through what I haven’t thrown out and organizing it somehow. For instance, I noticed that I have notes for the same novel written on 3 or 4 different pages, usually with notes for other things included: I need to combine those so that everything is on its own page.

And then I need to get everything typed into a Word doc, saved, emailed to myself for back up, and printed to be put into a three ring binder.

I have no idea when or if I’ll ever get to any of these Plot Bunnies, but at least they’ll be tamed when it is time to wrangle them into a novel.