Carnivorous Plants and Other Novel Things

So, you may notice a couple things about this blog post that are a little different than what you’ve come to expect.

One is that there are pictures.  (Yes! I do own a digital camera and every once in a while I dig it out and attempt to use it.)

(And when I do the batteries are usually dead.  *sigh*)

The second thing is that it’s not just about writing.

I had the weekend off. (Rare occurrence – I normally work weekends.)   So, between going to the Folk Festival here in Kittanning and eating some really awesome food (Toad in a Hole, anyone?) and writing, I played in the dirt and made some terrariums.  Some were from plants that I already had, left over from the terrarium class I took, but one was from plants bought at Folk Festival because I wanted a terrarium of carnivorous plants. 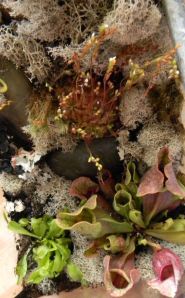 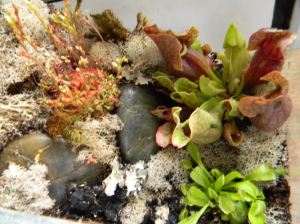 The carnivorous terrarium didn’t turn out exactly as I had envisioned.  It’s kind of cool, but not at all what I had in mind.  I haven’t decided yet if I’m going to tear it down and redo it or leave it as is.  (It all started because I wanted that one plant to be higher because it hangs down and I thought it would be cool to have it sort of hanging over the edge of the tank, an idea which necessitated an inordinate amount of landscaping.)  (If I redo it I’m going to just put it on a little hill in the middle of the tank so it can still hang down but not stick up.)

But anyhow, I digress. Building a hill was actually the easy part. I did that the day I brought the plant home from Folk Festival.   The problem was that the plant grows in a bog.  It likes to be wet.  Very very wet .  And “wet” is not what it would be on top of a hill of dirt.

You start with a vision of what you want the story to be.  And then a character decides that he wants to live on top of a mountain that you don’t have, but, hey! A mountain will look really good in that corner of the world.

But then more problems crop up. 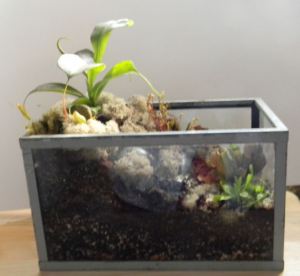 The mountain takes up too much space.   And there are supply issues.  And it’s kind of ugly.  (I need to “edit” the mountain in the tank and slope it back from the side a bit so I can put more moss and rocks there so it looks less like a cross section of a landscape and more like an actual landscape.  And stop telling me that there aren’t any mountains in bogs. I know that.  But this is my bog and it has a mountain.)

(Besides, I know of a boggy spot on top of a hill.   Fortunately, it was my mother’s horse that always managed to flounder into the belly deep muck, not mine.) 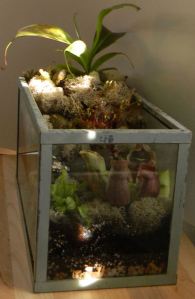 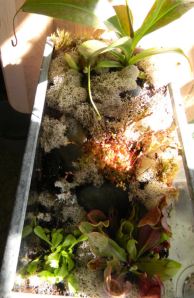 As I was photographing the carnivorous terrarium I decided to take pics of my other ones too, mostly because I’ve been promising pictures to friends.   And as I was sorting them out in Paint Shop Pro, it occurred to me that there are a lot of other similarities between terrarium building and writing.

Well, aside from the whole “world building” thing where you can put a mountain in your bog if you want to. 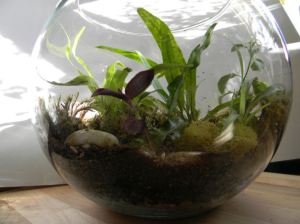 For one thing, terrariums can hold surprises, just like your novels can if you take the time to look a little more closely. 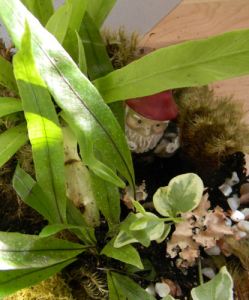 That little character is a pain in the posterior, by the way.  He simply refuses to stand up.  I’m going to have to make a little stand for him or something – much like you sometimes have to tweak a character so he or she will fit your world better.  Or how a character may need to learn to stand on his or her own feet.  Or even how you need to learn to do it instead of listening to everyone else’s advice about your writing.

So, yeah, take a close look and see what might be hidden in your prose. 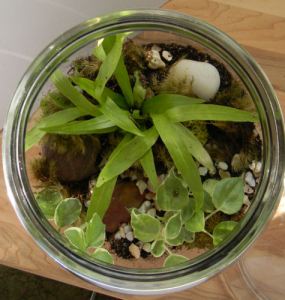 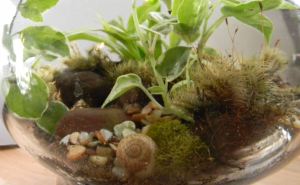 And sometimes things that you don’t expect to be all that pretty… are. 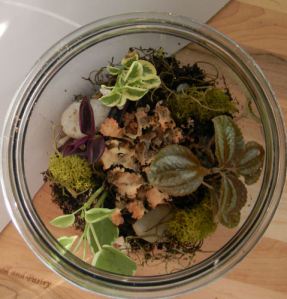 no matter how hard you try

get a clear picture. 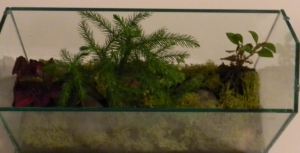 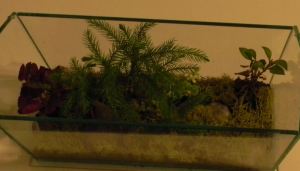 Tagged as creative process, other hobbies, the mind of a writer